EYE ON FAILURES is a series of articles about the stories of maintainers who have benefited from our platform and have been spared from sudden breaks.

A JOURNEY OF lots of LEARNING

The Paulinia – SP plant of Yara Fertilizantes, a multinational company, was one of the first to install vibration sensors from Tractian. It was thanks to this journey with them that we had, for example, the first opportunity to test and prove the resistance of the sensors to extremely aggressive environments. During the time they were collecting data there, they were constantly exposed to a corrosive atmosphere with lots of dust, moisture and heat. Despite the adverse conditions, the sensors continued to function.

We were very happy with all the learning we had during the time watching, the assets and also proud of the confidence we have gained in the work developed under the supervision of Pericles Sousa. Graduated in industrial automation engineering, he is responsible for monitoring the implementation of maintenance solutions and his team accumulates responsibilities over four other plants of the company. Check out more details of Yara’s experience with Tractian below!

INSIGHTS THAT MAKE a DIFFERENCE

Before monitoring by Tractian, the Paulinia plant already performed vibration monitoring with other systems. The main difference is that there was no sending of real-time notifications to those responsible for maintenance or an intelligent system that interpreted the data and indicated the possible cause of the anomaly.

The Tractian platform learned the specific behavior of our assets. This was very important in monitoring the cooling tower fans, which were failing frequently. With each significant increase in vibration rates, we were able to act in advance.

Regarding how the platform learns, the first notification of each asset that is sent to the customer is the Equipment Vibration DNA. It is generated after about two weeks of data collection from the sensors and is specific to each asset (hence the name DNA) and takes into account parameters such as RMS speed, average acceleration and vibration harmonics. From this, the limits of the standard behavior of the asset are defined: 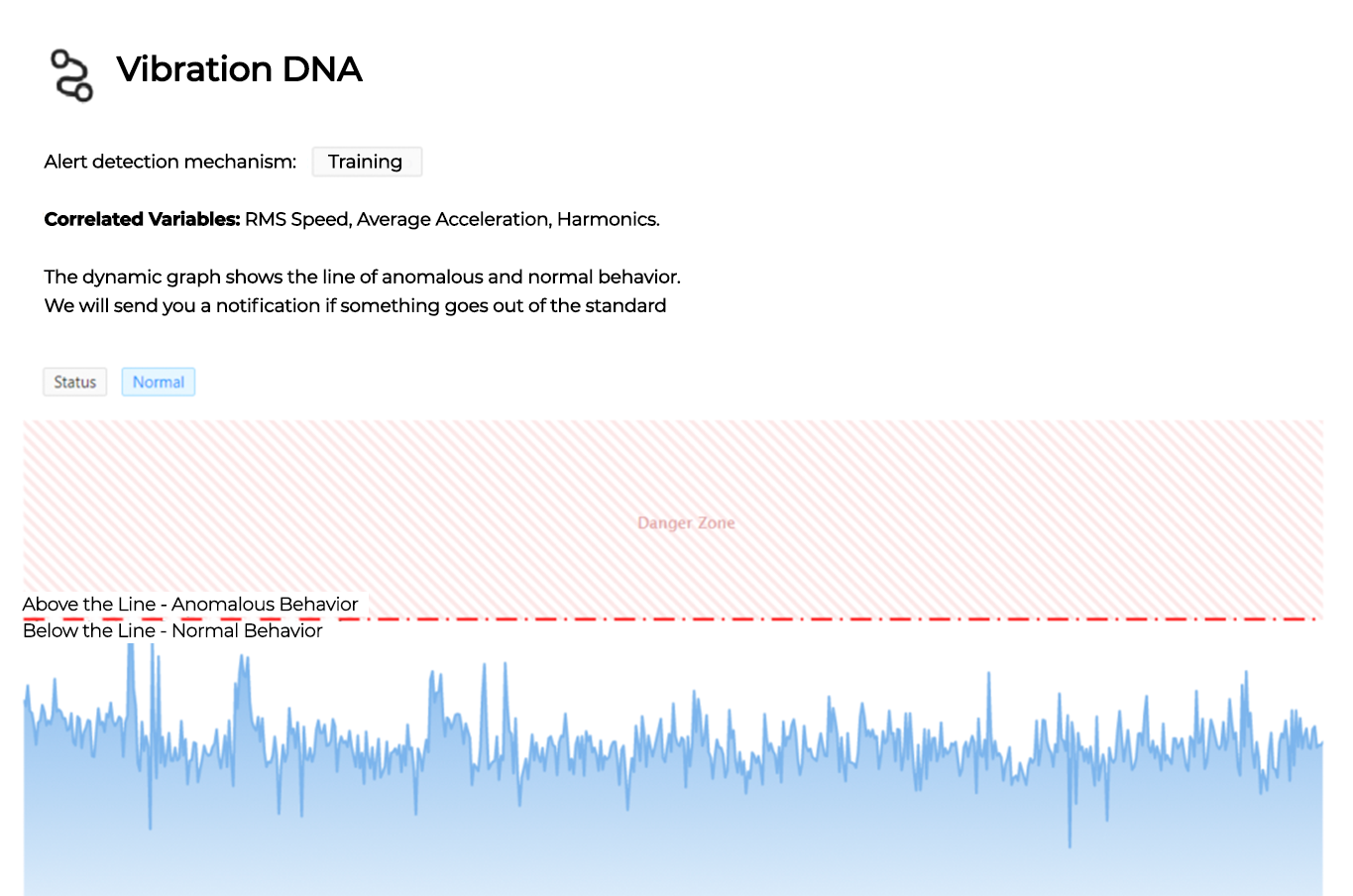 The choice of the plant’s assets to be monitored was strategic and included those of great criticality for production, such as a blower and a mill. With the help of our notifications, Pericles comments that it was possible to identify and plan what the intervals between the cleaning and inspection cycles of the assets should be like: “Every certain number of days we always received the same vibration increase alert, and it was as soon as we realized that we should adjust our cleaning routine.”

Real-time access to asset data has enabled us to avoid corrective maintenance.

Each critical asset of the monitored production line could have major impacts on the results, since 70 tons of fertilizers are produced per hour (equivalent to R$ 84 thousand / hour). Asked for more details on how Tractian changed their routine, he reports: “Based on the notifications, we were able to greatly improve our planning for downtime. Sometimes we anticipated a scheduled stop, when the situation of the asset was more critical, or even joined several activities which had been distributed along the week in one to resolve the problem indicated by the platform.”

He also says that, in the cooling tower, a vibration notification allowed the detection of a broken propeller before it generated major problems. In another situation, the platform reported an anomaly in the vibration of a blower booster, causing them to organize themselves to correct a failure in the lubrication system.

The most interesting results come down to the fact that, during the period when Tractian was monitoring the assets, there were no corrective maintenance recorded. In the mill being monitored, for example, a misalignment in the bearing shaft was corrected in advance thanks to the sending of an alert by the platform.

Want to know more how the notification went? See the graph of growth of vibration generated which enabled the Yara’s team to detect the misalignment in the bearing shaft: 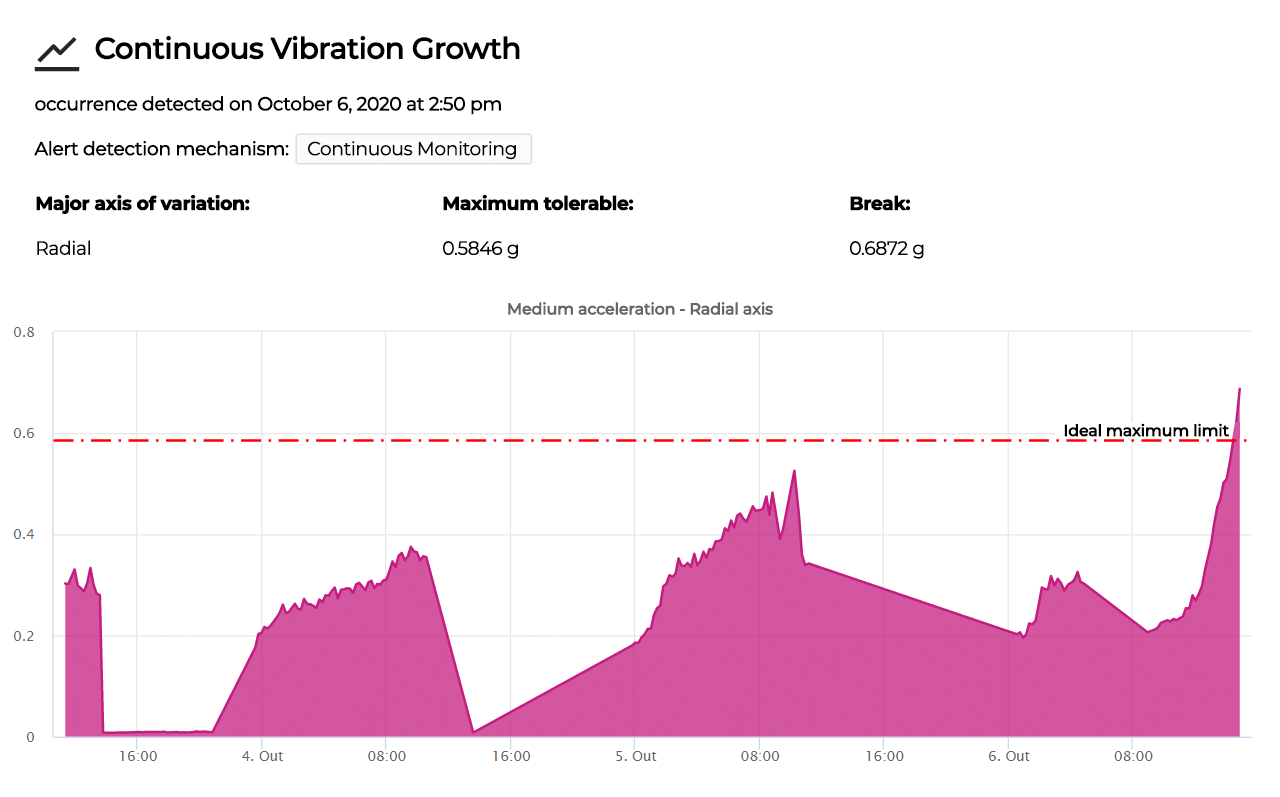 The activities conducted at the Yara’s plant in Paulinia proved the benefits of online monitoring and led to an expansion this year in the number of sensors, from five to fifteen, with great potential for other plants to be included in this type of asset monitoring in Brazil.