Eye on Failures is a series of articles about the stories of maintenance workers who have benefited from our platform and eliminated failures and unpredicted downtime in machines.

A journey of lots of learning

With over 16 years of experience in the field, Tiago Junqueira is a Maintenance Supervisor at AmstedMaxion, a company that manufactures steel wheels, railway castings, shock systems and traction for industrial castings.

With a degree in Industrial Production Management, and a graduate degree in Engineering and Maintenance Management, the Supervisor had his entire career built within AmstedMaxion, from his apprenticeship in 2006, until his current position.

AmstedMaxion is the largest casting operation in South America, using advanced technology to produce parts of up to 5 tons in carbon and low-alloy steel. It manufactures a diversified line of railway castings and, in the industrial segment, makes parts that supply sectors like mining, machinery, equipment for civil construction / off-road truck sugar and alcohol, operating in domestic and foreign markets.

Insights that save the day

It all happened very fast. Tiago says that he first got to know TRACTIAN in November 2020, and 12 sensors were installed in January 2021.

Before using the technology, unexpected downtime was something recurrent at AmstedMaxion. The supervisor explains that it was not possible to obtain information, understand, and predict which equipment would fail or when that would happen. After the installation of TRACTIAN’s sensors, it was possible to better understand asset data and, consequently, avoid sudden breakdowns:

We had a significant increase in reliable asset information after using the platform. We managed to transform all of this into knowledge, to understand the failures, the events before them and from that, avoid numerous breakdowns. The data collected by the sensors and sent to the platform helps us understand what is related to vibration and act preventively. It’s very productive.

The Supervisor also reports that a couple of AmstedMaxion machines, the F1135 sand mixer and the F5226 mechanical pickling machine, needed balancing. Through the data collected by the sensors and analyzed by the platform, it is easy to identify any behavior out of the ordinary, and this way avoid a serious breakdown that would stop production. 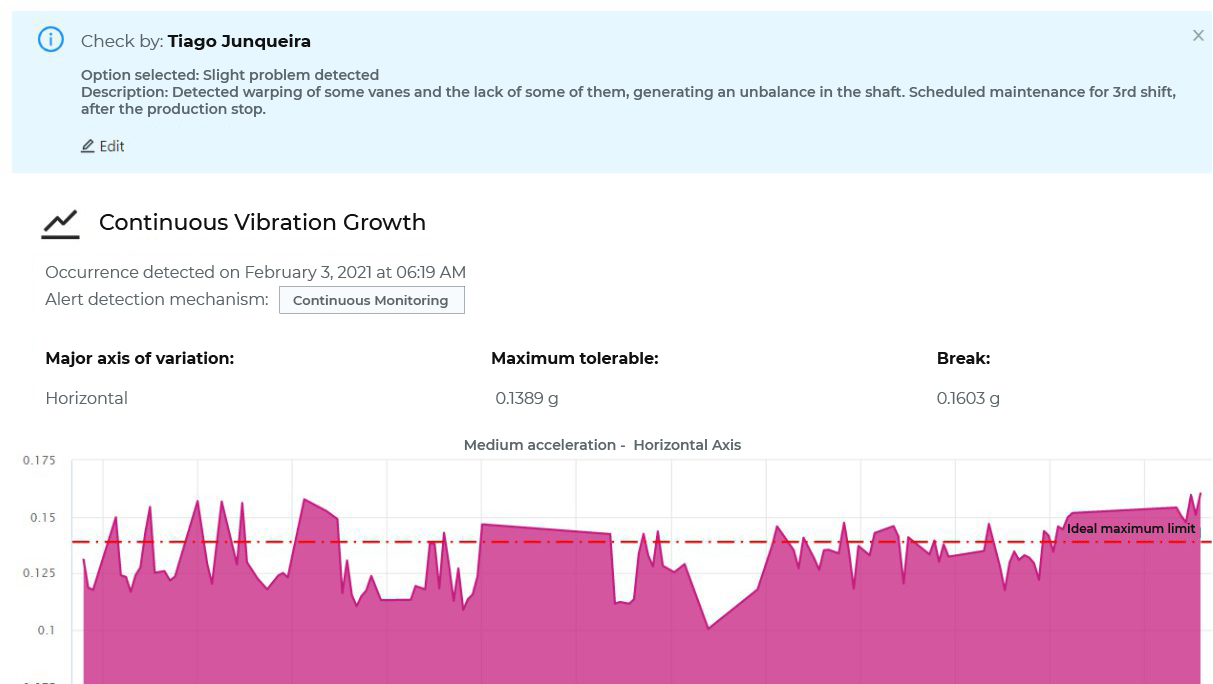 After a period of monitoring the mixer, it was found that the common vibration speed for that equipment is of 8mm/s on the horizontal axis and 4.5mm/s on the vertical axis. With scheduled preventive maintenance, there was a decrease of approximately 40% in the vibration of the equipment, which avoids early wear and future interruptions in production.

So with the generated insight, I am able to assign preventive maintenance immediately or schedule a check in. That way, I can make an intervention and avoid a serious breakdown that the imbalance might have created.

The monitoring of the vibration variables is continuous and done at a distance, in addition to the automatic insights sent by the platform. Reliability and availability have increased, and unplanned interventions in the mixer have been reduced. The replacement of parts with natural wear such as reeds and the preventive tightening in others, reduce equipment vibration and mechanical stress on critical items such as axles, bearings, bearings and motors.

The horizontal axis had peaks of vibration speed of 28.908mm/s while the axial axis reached 23.902mm/s.

Right after the preventive mechanical maintenance, there was a decrease to 10mm/s on the horizontal axis, about 65% reduction, and 13mm/s on the axial axis, approximately 50% reduction.

“Each critical asset on the monitored production line could cause major impacts on company results. The average repair cost if there was a breakdown would be significant, with a workload of 1h30 hours.”

Another point that sets TRACTIAN apart from the others is the ease of communication between the platform and the manager. According to Tiago, it saves time, money and it is fantastic to receive news via 3G/LTE network.

I have no doubt that the technology you develop is something that really supports and becomes a wild card in maintenance. Regarding our support platform, it always says the right thing, at the right time.

Finally, he comments that the MTTR and MTBF indexes have improved, also reducing the downtime index, thus increasing the availability and reliability of the equipment for production. Maintenance can be scheduled according to production, using schedules and resources more efficiently and with less impact to the operation.

Industrial Designer by UNESP.  Product design specialists with emphasis in digital manufacturing technology, innovation, and management. Providing to the creation of industry-relevant content. Partner and Marketing Director at TRACTIAN.